Ants are hardly ever traveling alone. Ant colonies usually travel together, and look for food as a team. During the ant escapades, they can tear up properties with ant hills, bring bacteria indoors, both your pets, and are just ultimate pests. There’s high demand for ant control because there seemingly never seems to be a shortage of ants in the world. (510) 900-5995

Ants are very small insects… and everyone knows what an ant looks like so we don’t have to even describe that to you.

What we can tell you is that if there are ants indoors or outside, Pest Control Oakland is the best in the insect exterminator business in the entire bay area. Our inspections are top notch and we do our part in finding all signs of ant colonies around and are able to pinpoint where we will be providing our services on your property.

Fire ants, sugar ants, carpenter ants, flying ants, and small little house ants are some of our more frequent insect exterminator calls, and there are thousands of reasons for that. Mainly because they are usually thousands of ants on hand when we get a call for ants, even if someone estimates there are only a few hundred. In large ant colonies, only some of the worker and soldier ants will make themselves visible and go to collect food while the rest of the colony stays hidden away from any threats. But it’s usually the ants that stay back in their  hill that do all of the reproducing. Ants reproduce at an incredibly fast rate, and if they are allowed to thrive for too long, they become an incredible problem to try and take care of.

For ant extermination or another type of insect exterminator to take care of your ant problem, call (510) 900-5995 now!

GETTING RID OF ANTS

Ants are a very social insect that will travel often in very large numbers. Usually in an ant colony there are usually at least 10 ants while some ant colonies have reportedly had millions of ants in a single colony.

Per ant colony, there will be a primary queen that will lay tons of eggs while she has her soldier ants and her worker ants with her.

There are many different types of ants that cause homeowners and business owners to reach out to exterminators in hopes of getting some serious ant control to help them.

Ants will go anywhere that they could find food for themselves and the colony. Ants will eat human food just as easily as they would eat dead animals, feces, garbage and other filth. Both of these things are total attractions to ants and their colony, and if there is something that they could take with them to feed their colony and thrive, they will do just that.

There are a few different types of ants in particular that we commonly will get calls for when someone is looking for an insect exterminator to take care of their ant infestations.

A list of some of the common ants that we will get calls for are carpenter ants, sugar ants, fire ants, house ants, and even flying ants. Some ants have wings on them, which certainly makes it easier to spread their population locally around them.

When an ant enters your home, the primary reason is in search of food as well as the stable shelter that is provided while they are indoors. Ants can make their way through the smallest of small openings in a home. Once inside, they will be in search of food, particularly greasy or sugary types of food. Once they make their way around the home and find the source of food, they will leave a trail behind them so that other ants that enter the home will be able to find the food for themselves.

Two types of problems will occur surrounding  ants making their way indoors a home. They will either build their nest indoors close to their food source, or will have their nest just outside and have the capability of getting inside to get to food when the time permits. The ants that build their nests outside to sneak their way inside usually are a bigger problem than the ones that form indoors because they are usually well adapted to the area that they have built their nest and feel comfortable sneaking inside for the best food when they are more than capable of living outside. These types of ant problems often will require help from a professional ant exterminator if you have identified a few hundred that have their nest outdoors. Ants will create intricate tunnel systems underground and an ant hill may or may not be visibly seen.

To keep ants outside of your home, there are a number of things that you can do to. Ant baiting is one major step towards ant elimination. Ants are usually formed of a colony where only a small amount of the ants actually go out in search of foraged food that they will then share with the rest of the colony. Ant bait attracts ants, but also kills them once it is consumed, but over a few day span. When the ants get the ant bait, it gives them time to bring it back to their colony, share it with the other ants, and have the potential to knock out large amounts of ants at once.

Ant contact killers are a spray that you can set up around the perimeter of your home as well as other areas that the ants will try to enter through, such as a window or crack in foundation. It kills ants upon contact and prevents others from entering that way and provides long lasting repellent. 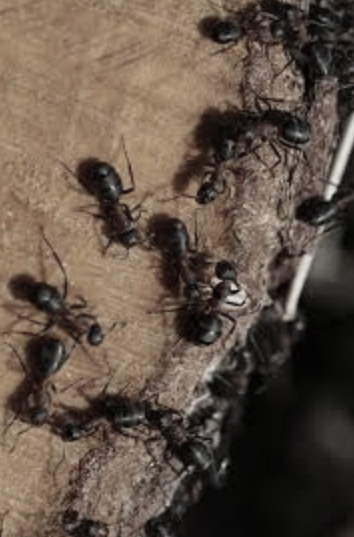